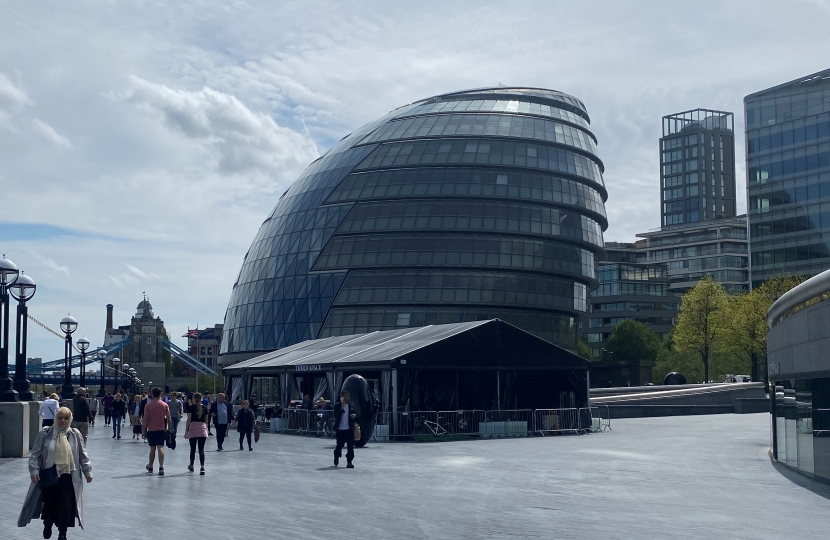 The work of the new term is well and truly underway here at City Hall.

Since my last update, I’ve been working on two of the most pressing issues for residents in South West London: Hammersmith Bridge and the proposed development at Mortlake Brewery.

I think everyone acknowledges that the ferry is not an ideal solution and will commence operations later than hoped. However, it will mean that, at last, people will be able to cross the river at Barnes. I met with the TfL project team last week to discuss the progress of the scheme.

My full account of that meeting is available here. One of the key risks to the ferry being operational by the first week of September is the length of time it takes to receive the required consents from the Marine Management Organisation. As promised, I wrote (jointly with Tony Devenish AM, my colleague across the water) to ask them to expedite the consents. Their reply, received this morning, shows they are aware of the importance and urgency and are doing their best to expedite the process.

I also met with members of the Hammersmith Bridge SOS group, who are doing excellent work holding politicians from all parties to account. I will never forget that behind the discussions of engineering, planning consents and funding sources are real people with real lives that have been immeasurably disrupted by the closure of the bridge.

It will indeed take politicians from all parties to get this problem resolved. At Mayor’s Question Time yesterday, Tony asked the Mayor to redouble his efforts to work with Hammersmith & Fulham and the Government to get the bridge re-opened. The Mayor agreed; we will hold him to this promise.

The proposed redevelopment of Mortlake Brewery is another issue right at the top of my list. I’m a great believer in seeing things with my own eyes, so I was grateful to members of the Mortlake Brewery Community Group for taking me on an extensive site tour.

It’s one thing to look at a plan on paper, quite another to stand next to Chiswick Bridge alongside that quiet, beautiful stretch of the river – I always feel there’s something rather poignant about that part of the Thames – and visualise the changes the development would bring. It’s obvious that the current plans would be intensely damaging to Mortlake and the surrounding area.

Following the tour, I met with a GLA Senior Strategic Planner to raise questions about the scheme and to impress upon him residents’ concerns. From this meeting came a commitment by officers to meet with residents on site to hear their concerns directly and see the impact the development would have on the local community.

I hope that the planners will be as moved by this experience as I was.

Since I last wrote, the machinery of the Assembly’s committee system has properly whirred into life. I attended the confirmation hearing for Sophie Linden, the Deputy Mayor for Police & Crime as well as the red-letter day of the Assembly calendar – Mayor’s Question Time.

Sophie Linden spoke well at her confirmation hearing. I questioned her about her duty to engage with local people. She acknowledged that getting out of City Hall was something she wanted to do more often. I look forward to introducing her to residents of South West London!

Yesterday was my first Mayor’s Question Time. As well as submitting a whole load of written questions, I was very keen to press the Mayor to address resident concerns about crime in Richmond. Tragically, last week there was a murder in broad daylight in central Richmond. This follows from extremely serious anti-social behaviour on Richmond Green and the Riverside following the easing of lockdown restrictions last year.

A resident wrote to me about all of this, saying that her son is now afraid to walk home from school on his own. It’s just not acceptable.

I asked the Mayor for two things – first, to commit to finding a permanent town centre base for the local Richmond police team. Second, to meet with local councillors and residents so their concerns can be discussed.

I’m glad that the Mayor has promised to investigate the police base issue and has agreed to a meeting – likely to be with his Deputy Mayor for Police and Crime. I’ve immediately followed up my question with a letter so we can get a date in the diary ASAP.

MQTs was an interesting experience. I’m self-aware enough to admit to having a few butterflies in my stomach as my question approached! All us new Conservative AMs put questions to the Mayor. I was especially impressed with Emma Best’s robust insistence that the Mayor meet with local campaigners to discuss their significant concerns with a local incinerator.

Finally, I was really excited to launch a new podcast with fellow newbie Assembly Member Neil Garratt of Croydon and Sutton. The podcast, Inside City Hall, looks at the workings of London’s government. It will be a mixture of news and opinion from Neil and me as well as special guests from the Assembly and beyond. You can listen on Apple Podcasts, Spotify and wherever else you find your podcasts. Please do give us a listen!

I’ve given these occasional written musings a name – ‘City Hall Life’. It seems appropriate; I have realised these last few weeks that being an elected representative is very much a way of life. It’s immersive, challenging, fascinating and a very rare honour. My aim is not just to be a voice for my residents in City Hall, but to work with them to build better communities across South West London.

That’s it for this time. As ever, if I can help with anything you can always get in touch. Have a great weekend!