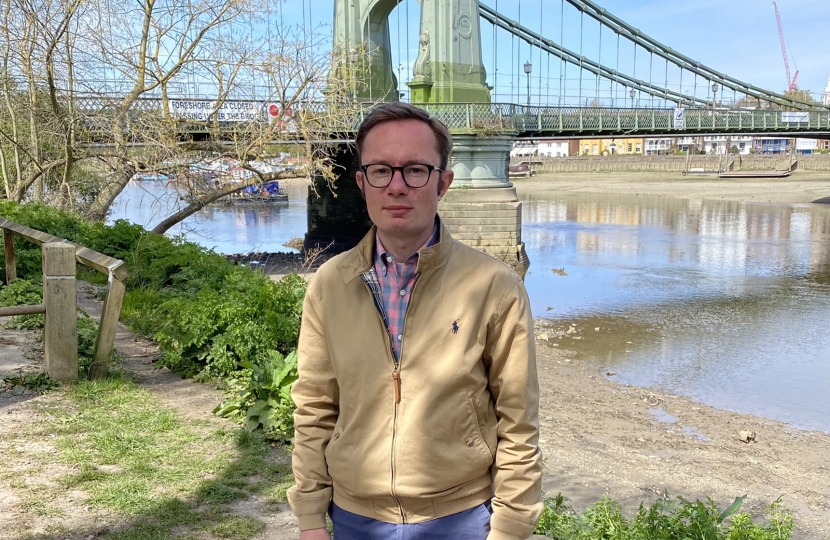 Residents know too well the history of the Hammersmith Bridge closure.

People I’ve spoken to – in Barnes and across South West London – are not interested in political point-scoring. They just want the Bridge reopened.

I do too, so I’m heartened to see Shaun Bailey’s clear, achievable plan to solve this issue once and for all. As Mayor, Shaun will:

These are all choices that the Mayor of London could make. The current Mayor has decided not to make these choices; Shaun will.

I will support Shaun as Mayor in delivering this plan and will hold him to account for doing so. I will be in his office on day one, pushing for action, especially on the temporary bridge, and will ensure he always feels the absolute urgency of this situation.

You can read more about Shaun’s plan on pages 20-24 of his manifesto.

More broadly, I will address this issue as a matter of urgency if elected on 6th May.

For example, I am not happy with TfL’s vague ‘end of summer’ timetable for the ferry. I appreciate that some residents don’t see the ferry as an ideal solution – we need to deal with the displaced traffic, too, and that means a temporary road bridge – but it will at least get people moving across the river, not least schoolchildren who have been struggling throughout this.

One of my first actions will be to meet with the relevant TfL staff to press them on providing a more rigorous, precise timetable for the ferry. They must share their project plan and expected milestones. I will also challenge the operating hours of the ferry; as a shift worker, I know how tough it can be when public transport doesn’t match working hours. Finally, I want to ensure that TfL will integrate ferry and bus timetables; with my railway background I understand how much value passengers place on integrated public transport.

My political hero is Abraham Lincoln, who said, ‘whatever you are, be a good one’. I intend to follow his advice and be a good Assembly Member, which means be open, transparent, active and visible. The London Assembly scrutinises the activities of the Mayor, which of course includes Transport for London. I will fight for clarity and timeliness in any Mayoral and TfL actions relating to the Bridge.

I will keep residents up to date with my actions regarding the Bridge. Communication on this issue has not been good enough; I will set up a mailing list to keep interested residents informed regularly when developments occur that fall within the Assembly Member’s remit.

Assembly Members don’t control budgets, but they do have a unique platform that pitches them between local and national politicians. I intend to use this platform to influence, lobby and cajole on behalf of residents affected by the closure.

That means using my position to help keep things moving forward, especially if issues at TfL are holding up the process.

Thinking even more broadly, I want to use my background in writing and implementing emergency plans in the railway industry to push for a full review of London's emergency planning procedures. There should be thorough and tested contingency plans in place for situations such as the sudden closure of a critical piece of city infrastructure.

Other parties are asking residents to vote for them to ‘send a message’ about the Bridge. I think residents are fed up of ‘sending messages’ – they just want Hammersmith Bridge reopened so they can get on with their lives.

My advice to residents is to vote for Shaun Bailey – the only Mayoral candidate with a credible plan for resolving this issue. – and me, to provide a strong and informed voice supporting residents on the London Assembly.